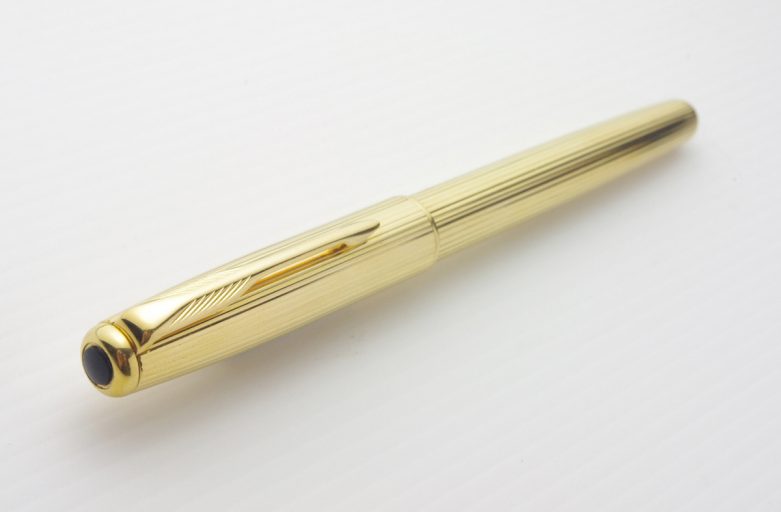 Parker Dimonite Ballpoint Pen.This Parker pen has a futuristic look about it that sets it apart from most Parker pens. The Dimonite finish on the mid section of this pen is a form of gold plating developed by Parker in the early 2000s and this was the first pen released by Parker with this finish. Dimonite is an alloy of 50% gold and 50% titanium and was subsequently used only on high end Parker pens including the Sonnet.
Dimonite Z is lustrous and super-hard, titanium plated finish produced by the physical vapor deposition (PVD) of gold and fine titanium aluminium carbonitride in a micro-laminar structure. The process is patented by PARKER. (Dimonite G is the gold coloured version of Dimonoite.)
At 35g it’s much heavier than most Parker ballpoints but it fits comfortably in your hand, perhaps due to it’s slim waisted barrel shape, and it’s nicely balanced when writing.
It’s very unusual for a pen in this price range to have such a unique and expensive plated finish.
Features:
Refill: Standard Parker Ballpoint refill, Parker Style Gel Refills, Fisher SPR series